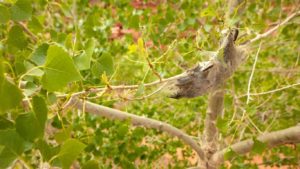 What are Western Tent Caterpillars

What are western tent caterpillars? What do they look like? What do they eat? What kind of damage can they do to your trees and plants? In this guide, we will answer all of those questions and more.

What are western tent caterpillars?

Western tent caterpillars are a type of moth that is found throughout North America. They are most commonly seen in the spring and summer months, when they are in the larval stage. These caterpillars can cause extensive damage to trees and other plants, so it is important to be able to identify them.

Western tent caterpillars belong to the family known as Lasiocampidae. They are generally yellow, orange, or brown with a distinctive “tent” shaped webbing. Most of them have four broods per year. Western tent caterpillar adults feed on flower nectar and leaves while their larvae feed on foliage in order to grow and develop into adults.

They get their name because they create tents or webs made of silk, which they use to protect themselves while molting.

Western tent caterpillars are native tree-feeding insects. They build nests, or tents, in the forks of branches on cherry and other trees. Large numbers of caterpillars in nests can damage or kill branches.

The female moth lays eggs in masses that encircle small branches. The eggs eventually hatch into larvae in springtime. Newly hatched caterpillars disperse from the nest and feed in groups on leaves.

These larvae feed on leaves then move to form communal nests in the crotches of branches or other protected areas where they can molt safely. These nests are made of silk webbing that contains dead leaves and frass (insect droppings).

As they grow, the caterpillars construct a new nest on a branch from silk secreted from glands located between their mandibles (jaws). The caterpillar crawls into this nest at night or during periods of rest and molts inside it. There are many instars (developmental stages) of western tent caterpillars before pupation occurs in mid-summer.

Pupation takes place inside a cocoon that is attached to the host plant. The adult moth emerges about two weeks later and mates. Mating occurs soon after the female moth ecloses (emerges from the cocoon).

The larvae are active from late spring through early summer, when they pupate. Adults emerge in mid-summer and mate. Females lay eggs on small branches near where caterpillars will hatch the following spring. There is only one generation per year.

Western tent caterpillars are easy to identify. They have a white body with a black head and a yellow stripe down the middle of their back. They also have two large, black eyespots on their heads.

If you look at the branches and trunks of the trees in your backyard or neighborhood, you may notice a small, white tuft of tent-shaped webbing on them. If you look closely, these webs are attached to a pale green egg-shaped body about an inch long with black feet and a small orange head. This is a western tent caterpillar.

What do they eat?

These caterpillars feed on the leaves of trees and other plants. They can damage or even kill plants by eating all the leaves off of them.

Western tent caterpillars are voracious feeders and will eat just about any plant material that they come across, but prefer fruit trees, fruit bushes, and woody ornamentals.

The caterpillars and their tent-like nests are most commonly found in cherries, apples, plums and crabapples, but they can attack many other deciduous trees such as oaks. These tree pests are also known as the apple tree caterpillar for the way they destroy fruit trees.

What kind of damage can they do?

The damage that western tent caterpillars can do is extensive. If enough caterpillars are feeding on a tree, they can completely strip it of its leaves. This can cause the tree to die, or at least make it vulnerable to other pests and diseases.

Western tent caterpillars can also cause damage to other types of plants. They will eat the leaves of any plant they come across, so it is important to be vigilant in keeping an eye on them if you have any gardens or flower beds near your home.

Insects like western tent caterpillars that feed on leaves are known as defoliators. Defoliating insects can do a lot of damage to trees and other plants by eating all their leaves. This makes the plants vulnerable to disease and other pests, which can often kill them.

Western tent caterpillars can cause health problems for people and animals if they are ingested or come into contact with the skin. The main health concern is from the caterpillar’s hair, which can cause irritation to the eyes, nose, throat and skin. In severe cases, it may lead to difficulty breathing. If you or your pet comes into contact with a western tent caterpillar, it’s important to wash the affected area with soap and water immediately. Seek medical attention if any irritation persists.

While western tent caterpillars pose little threat to humans, they can be deadly to animals if ingested. Smaller mammals such as rodents and rabbits are particularly vulnerable as they are unable to vomit the caterpillars like we can. This can lead to the larvae becoming lodged in their throats, which can ultimately cause death. If you see your pet ingest a caterpillar, contact your veterinarian immediately.

How can I get rid of western tent caterpillars?

If you find western tent caterpillars in your backyard or garden, there are several things you can do to get rid of them.

While pesticides may be effective in getting rid of western tent caterpillars, they can also be harmful to other insects, as well as pets and people. It is important to read the labels carefully before using any type of pesticide or insecticide.

If you live in an area where there are lots of trees, it is likely that you will see western tent caterpillars at some point during the spring and summer months. While they can do some damage to trees and other plants, they are not usually considered serious pest. By knowing what they look like and what damage they can do, you can be prepared in case you do come across them in your backyard or garden.

How can you prevent western tent caterpillars?

The best way to prevent western tent caterpillars is to create a barrier around your property. You can do this by removing any potential nesting sites, such as fallen leaves and debris. If you have trees on your property, trimming back the lower branches can also help deter these pests.

Finally, make sure to seal any cracks or crevices in your home’s foundation and exterior walls to prevent them from getting inside.

Despite their destructive nature, western tent caterpillars play an important role in the ecosystem. They are a food source for many predators, such as birds, spiders, and snakes. By controlling the population of these pests, you can help maintain the balance of nature.

Can I touch a tent caterpillar?

Yes, you can. They’re not slimy or anything. In fact, they’re pretty dry to the touch. But that doesn’t mean you should handle them. Some people can have allergic reactions to caterpillars, so it’s best to just admire them from afar.

What do tent caterpillars turn into?

Tent caterpillars eventually turn into moths. The transformation from caterpillar to moth is called metamorphosis. It’s a pretty incredible process to watch.

What is the difference between a Western and an Eastern Tent Caterpillar?

No, they’re not poisonous. But that doesn’t mean you should go out of your way to eat them!

What do I do if I find a nest of them?

If you happen to stumble upon a nest of western tent caterpillars, it’s best to just leave them alone. They’re not harmful, but they can be really annoying when they’re in large groups. If you’re really worried about them, you can contact your local pest control to have them removed.

Western tent caterpillars are a pretty interesting species. They feed on a wide variety of host plants, which makes them a serious threat to ornamental trees, fruit trees, and vines in residential landscapes, as well as agricultural produce. They go through an amazing transformation from caterpillar to moth.

If you find a nest of Western Tent Caterpillars, it is best to leave them alone as they are not harmful. However, if you are worried about their presence or would like them removed, take action or contact your local pest control for assistance.