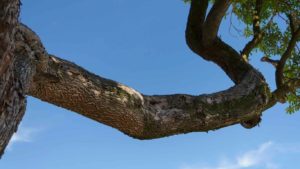 Difference Between a Branch and a Limb

When it comes to trees, many people get confused about the difference between a branch and a limb. Both of these parts of a tree are important, but they serve different purposes.

Many people use the words “branch” and “limb” interchangeably. However, they are not synonyms and have distinct meanings, which include what part of the plant body they are associated with. In this guide, we will discuss the differences between branches and limbs, and explain why it is important to know the difference.

From largest to biggest it goes from trunk to limbs to branches to twigs to leaves.

What is a branch and how can you identify it?

A branch is a woody, often relatively thick and strong appendage that grows out from the trunk of a tree. It typically has many leaves attached to it, which are used for photosynthesis as they absorb sunlight, water, and minerals from the soil.

In botany, a branch can be described by its position on the tree (terminal, lateral, or subtending), its orientation relative to the main axis of the tree (ascending, descending, or horizontal), and its relative size (thin twigs versus thick trunks).

Branches can also be described by their point of attachment to the stem (internally located buds versus growing tips) and their morphology (a short, leafless shoot versus a long-leafed shoot).

Limbs are usually found on the main trunk of the tree, while branches are found on secondary limbs that grow off of the primary limbs.

One way to remember the difference between these two plant parts is by thinking about their function in relation to the rest of the tree. Branches provide support for leaves, which are essential for photosynthesis. Limbs, on the other hand, do not typically have leaves attached to them and are used for structural support.

What is a limb and how can you identify it?

A limb is an outward growth from an organism like a tree, shrub or any other plant. It produces its own leaves, flowers and can also bear fruits. It is a woody, often relatively thin and weak appendage that grows out from the branch of a tree.

A limb typically has many buds attached to it, which will become new branches or flowers in the future. Limbs also extend from the tree’s crown, unlike branches that are found below the crown.

Why is it important to know the difference?

Knowing the difference between a branch and a limb is important because it can help you identify problems with your trees. If you notice that a branch or limb is dying, you will be able to take appropriate action to save the tree.

In addition, understanding the differences between branches and limbs can help you prune your trees more effectively. When pruning, it is important to make sure that you only remove limbs and not branches. Removing branches can damage the tree and may even kill it. But sometimes it is necessary to do. Here you can find the cost of tree limb removal and here is the cost of tree branch removal.

What are the differences between a branch and a limb?

This is one of the main distinctions between branches and limbs. Branches are smaller, while limbs are larger.

A final distinction between branches and limbs is their function.

Branches are where you start to taper the trunk of your tree. They have the best angle and bend towards the inside of the tree trunk, and can be either inward or outward-facing.

These branches need to be cut back if they are growing out of control and forcing the tree to grow in a way that is not aesthetically pleasing. They can also get so long that they cause shade issues, leading to unappealing growth further up on the tree. The branches act as supports for smaller branches as well, which will help them to grow and develop properly.

On the other hand, limbs are not used for support. Instead, they are used for movement. Animals use their limbs to walk, run, jump, and climb. This is due to the fact that limbs are much more flexible than branches.

Branch growth is mainly determined by the tree’s genetics. Once a branch has been cut, it will not grow back.

Limb growth, on the other hand, is not determined by genetics. If an animal loses a limb, it can grow back. This is because limbs have the ability to regenerate.

Limbs can further develop by producing more branches after about four years of growth.

Similarities between the branch and limb

How to care for branches and limbs

When pruning branches or limbs, always use sharp shears and make a clean cut. Do not leave any jagged edges. This will help the branch heal properly and reduce the chances of disease or infection. If a branch is diseased or infested with insects, it should be removed completely. Damaged branches can be trimmed back to healthy tissue.

Paint or seal the cut end of a branch with tree paint or pruning sealer to help prevent moisture loss and reduce the chances of disease.

Branching plants need regular watering, especially when they are first planted. Water deeply and regularly, making sure the soil is moist but not wet. During hot weather, water more often to keep the soil cool and moist. Mulching can also help retain moisture in the soil.

Feed branching plants once a month during spring and summer with a balanced fertilizer such as 20-20-20. Follow package directions for dosage rates. Too much fertilizer can be harmful to plants, so it’s important to read the label carefully before using.

How do they differ in terms of their structure?

When does a stem produce a branch?

A stem produces a branch when it grows an axillary bud. This occurs near the base of the stem, where there are two small bumps known as nodes. The bud will grow into a new branch, which will then bear leaves in an alternate arrangement.

When does a stem produce a limb?

A stem produces a limb when it grows an adventitious bud. This occurs near the tips of the stem, where there are no nodes. The bud will grow into a new limb, which will then bear leaves in an opposite arrangement.

What are the uses of branches?

Branches are used for various purposes such as to support the weight of fruits and flowers, to provide shade, and to serve as scaffolds for climbers.

What are the uses of limbs?

Limbs are used for various purposes such as to support the weight of fruits and flowers, to provide shade, and to serve as scaffolds for climbers.

Do branches or limbs have flowers or fruits?

Both branches and limbs can bear flowers or fruits. However, the flowers and fruits may not be present on all branches or limbs.

Are branches and limbs poisonous?

Some branches and limbs may contain toxins that are harmful if ingested. For example, the poison ivy plant bears poisonous berries on its branching stems. Be sure to learn which plants are poisonous before harvesting any parts from them.

So, in summary, while most people use these two terms interchangeably, there is a difference between a branch and a limb. A branch is a smaller, secondary stem that grows out from the main stem of the tree, while a limb is a large primary branch that extends from the trunk. Both are important for the health of the tree, but they serve different purposes.