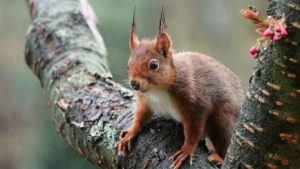 Do you ever see squirrels out during the day? Are they nocturnal animals? In this guide, we will explore whether or not squirrels are active at night. We will also discuss some of the behaviors that different species of squirrels exhibit during the day and at night. Stay tuned to learn more about these adorable creatures.

The answer to this question is no. As a matter of fact, squirrels are diurnal, which means that they are more active during the day.

Nocturnal would mean that squirrels are more active at night. Although some people may think that squirrels are nocturnal because they see them outside their houses or hear them scratching in their attics, these animals do not like the dark.

In fact, there have been multiple studies done on squirrel behavior that have proven that they do not prefer the dark and would rather be out interacting with other squirrels during the day.

There are a few species of squirrels that may be more active at night than others. For example, the northern flying squirrel is one of the few nocturnal squirrels. This species is known to fly from tree to tree in search of food.

Other types of squirrels, like the Eastern gray squirrel and the Red Squirrel, are not as active at night as the flying squirrel. These two species usually retire for the evening when it starts getting dark outside.

So why do people think that all squirrels are nocturnal?

Although squirrels generally prefer to be active during the day, there is always a chance that you may see one out and about at night. If this happens, just remember that they are not really nocturnal animals—they’re just trying to avoid being seen by you.

Where do squirrels go at night?

Squirrels are considered by many to be one of the most active creatures during the day. However, this does not mean that squirrels are not active at night. In fact, many squirrels are quite active when the sun goes down. This can be attributed to a number of different factors, including their need to find food and protect themselves from predators. Mostly squirrels will sleep in trees at night.

Squirrels need food, shelter and a place to raise their young. In rural areas where these needs can be met without interaction with humans or pets, squirrels may venture out at night. In urban areas, where food sources like nut-bearing trees are limited, squirrels may travel far distances to find food and return to their nests after dark so as not to be seen.

Mating season is also a time when squirrels may be more active at night. Males will travel long distances to find mates, and females will leave their home ranges in search of males. After mating, the female will return to her home range to have her litter and raise her young.

What else should you know?

Squirrels may be active at night in areas where they feel safe and secure. Areas with little or no human activity are ideal for nocturnal squirrels. Squirrels can also become active at night if their food source becomes scarce or if they are looking for a mate.

The most common squirrel species in the United States, such as the Eastern Gray Squirrel, are active during the day. But that doesn’t mean there aren’t squirrels out at night.

The smaller fox squirrels, which can climb trees and scurry across power lines, are more likely to be active at night than the larger gray squirrels that are commonly seen foraging for nuts in parks and yards throughout the country.

Nocturnal activity is more common in rural areas with little human activity, though suburban and urban squirrels may venture out at night if there is little fear of humans or dogs, who may attack them during the day.

However, they can be considered crepuscular, meaning that they are most active at dawn and dusk. This means that you are likely to see more squirrels during the early morning and evening hours.